Kennesaw Georgia is a beautiful town just North of Atlanta via I75. If you live close you owe it to yourself to plan a visit to this charming Southern town. The name Kennesaw is from Cherokee derivative meaning burial ground.

The City of Kennesaw is in Cobb County and is most known for two things. First Kennesaw is largely known for the Civil War, and secondly because of the gun possession ordinance inside the city limits. 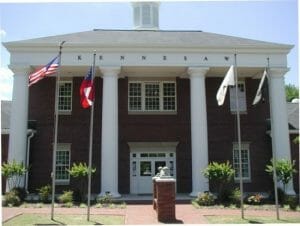 Kennesaw was originally a settlement called Big Shanty in 1830 till 1887, then was re-named Kennesaw in 1887. Due to the railway being a big part of the area it set the stage for The Great Locomotive Chase on April 12,1862.

There is also the General Locomotive museum (in the center of Kennesaw where the actual train is stored on display), named after the great chase where Union Army volunteer commandeered The General (name of the locomotive) and took the locomotive north toward Chattanooga causing as much chaos and damage as possible to the rail way line. The chase went for about 87 miles, first on foot then the Confederate soldiers pursued in The Texan (name of locomotive). Learn more or plan a visit to check the real General locomotive at the Southern Museum of Civil War & Locomotive History.

What Kennesaw is known for secondly is the gun ordinance. In 1982 Kennesaw City Council passed a city ordinance stating every head of household to own a firearm and the ammunition for it. There is a old new paper article talking about how it might effect crime in the area written by Jonathan Hamilton and David Burch;

KENNESAW, Ga – Several Kennesaw officials attribute a drop in crime in the city over the past two decades to a law that requires residents to have a gun in the house.
In 1982, the Kennesaw City Council unanimously passed a law requiring heads of households to own at least one firearm with ammunition.
The ordinance states the gun law is needed to “protect the safety, security and general welfare of the city and its inhabitants.”
Then-councilman J.O. Stephenson said after the ordinance was passed, everyone “went crazy.”
“People all over the country said there would be shootings in the street and violence in homes,” he said. “Of course, that wasn’t the case.”
In fact, according to Stephenson, it caused the crime rate in the city to plunge.

The topic of the gun ordinance has been a nation wide story at times.

Watch this video that tells more about how great the community of Kennesaw is!

Kennesaw has many shopping malls and museums, many outdoor activities all year round. Kennesaw State University is just minutes away. There is also a public airport –  Cobb County Airport also known as Mccollum Airfield.

Vulcan Material is one of the largest business’ in Kennesaw and has been there close to seventy years. The mining facility also has a museum that schools can come an tour.

Even with Kennesaw being a small town with currently a population just over 32,000 at 9.5 square miles, it is packed full of history and unique things to do. The city has events in downtown at the depot almost every weekend and holiday during the year. To see a list of future events have a look at their website and click on the “Things To Do” tab.

Kennesaw is still a small country town where people are friendly and still knows and waves at their neighbors, with all the ease of living in the big city because nothing is to far away.

In short – We Love Kennesaw! If you have a house that you would like to sell in Kennesaw or any of the surrounding areas – reach out to us at (770) 756-8680 or visit our website to complete a brief form and we will get back with you soon.

Check out our previous article “Advantages And Disadvantages of Selling Your Home For Cash” here.