Marietta Is A Fantastic Place To Live And Work!

Marietta is a fantastic city! Okay, we might be a little biased because it happens to be the headquarters for our company. But still, it is a beautiful place to live and work along with some amazing people. 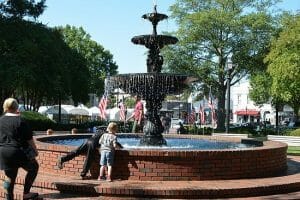 The City of Marietta, Georgia, is a full-service municipality that is located in central Cobb County, about 15 miles northwest of Atlanta, Georgia. Marietta has a distinguished and unique history and modern life style all rolled into one. With the city being only 23 square miles housing about 56,600 residents, it is one of Georgia’s most populous cities.

The most known landmark is The Big Chicken, it is a Kentucky Fried Chicken Restaurant. The Big Chicken was built in 1956 and is at the intersection of two main thoroughfares in Marietta being Cobb Parkway and Roswell Road. It is said that when you are not from the area and need directions to anywhere, everyone will say “From the Big Chicken you will go….”. This location also has a small museum about the history of KFC.

According to the City of Marietta’s website, the city was one of the first in the area to have early settlers prior to 1824. The Marietta Square, now known as Glover Park, was typical of an older towns design, including the courthouse being a center point of the square. In 1834 the Georgia General Assembly recognized Marietta as a community. The first bank in the town was opened in 1855. The city has seen its share of devastation also, in the 1850’s the town suffered mass damage by fire on three different instances. And in 1915 the National Guard was called in when the Governor gave an eleventh-hour commutation from death to life in prison to a suspected murderer of 13year old Mary Phagan. Leo Frank ended up being lynched on Roswell Road on August 17,1915.

Here is more from Wikipedia about Marietta:

Built-in 1838, the Oakton House is the oldest continuously occupied residence in Marietta. The original barn, milk house, smokehouse, and well house remain on the property. The spectacular gardens contain the boxwood parterre from the 1870s. Oakton served as Major General Loring’s headquarters during the Battle of Kennesaw Mountain in 1864.

Marietta was initially selected as the hub for the new Western and Atlantic Railroad, and business boomed. By 1838, roadbed and trestles had been built north of the city. However, in 1840, political wrangling stopped construction for a time. In 1842, the railroad’s new management decided to move the hub from Marietta to an area that would become Atlanta. Nonetheless, in 1850, when the railroad began operation, Marietta shared in the resulting prosperity.

Businessman and politician John Glover arrived in 1848. A popular figure, Glover was elected mayor when the city incorporated in 1852. Another early resident was Carey Cox, a physician, who promoted a “water cure”, which developed into a spa that attracted patients to the area. The Cobb County Medical Society recognizes him as the county’s first physician.

You can also learn much more about Marietta by visiting their website at https://www.mariettaga.gov/738/About-Marietta.

The city of Marietta Georgia is a very exciting and unique place to live and work! Marietta has so much going on you will never be bored and you will still have the “Small home town” feel. There is a park in the center of town called Glover Park also known as Marietta Square and it has hosted thousands of weddings and proms photographs. It also has a playground for the kids and concerts on weekends and almost every holiday. There are many restaurants and small shops on the Square. There is everything from beautiful old buildings, entertainment and new places to eat all within walking distance.

Marietta also offers plenty of interesting things to see and do that are all within minutes from the square such as;

Marietta has a very diverse work force, there are many large companies that keep the ever growing area employed;

Check out this video that tells even more about this great city!

As you can see, Marietta has a lot to offer!

Moving to or from Marietta?

If you have a house in Marietta and are looking for a “we buy houses” company that will buy your house – we are the people to contact! Just check out our website to complete a brief form or call us anytime at (770) 756-8680. If you are looking for your dream home in Marietta, we can help you with that as well!

You can also click here to learn more about how we buy houses works.