Everyone over the age of 30 remembers the housing bubble of ’07. If you had a home for sale during ’07 to ’09 there was a good chance that you were having to sell your house way below what you paid for it. This caused a lot of stress on homeowners that had to move because of job relocations or for whatever reason they had to move. Some homeowners were forced into being what is known as “accidental landlords” to either keep from losing so much money, or just not being able to find a buyer. Now there are a lot of reports that indicate that we may be headed for another bubble 🙁

Is The Housing Market Going To Crash Again? 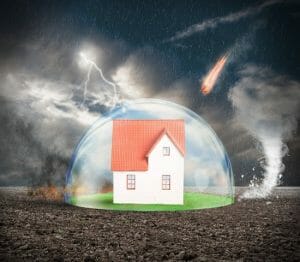 There were a few factors that caused the housing crash of ’07 – ’09. One of the major factors that caused the problem was subprime mortgages. In short that is a mortgage given to someone that really can’t afford the note. Many of these loans were interest only, meaning they only made the interest payments and paid nothing towards the principal. You would think that most people in their right mind would know that this is a bad idea!

Here is a great explanation of what happened:

The financial crisis was primarily caused by deregulation in the financial industry. That permitted banks to engage in hedge fund trading with derivatives. Banks then demanded more mortgages to support the profitable sale of these derivatives. They created interest-only loans that became affordable to subprime borrowers.

In 2004, the Federal Reserve raised the fed funds rate just as the interest rates on these new mortgages reset.

Housing prices started falling as supply outpaced demand. That trapped homeowners who couldn’t afford the payments, but couldn’t sell their house. When the values of the derivatives crumbled, banks stopped lending to each other. That created the financial crisis that led to the Great Recession.

That’s a great explanation from the Balance, far better than we could explain 🙂 . One thing to note that we aren’t really seeing now is that supply isn’t out pacing demand, so that is a little of good news.

So the subprime mortgage industry really kicked things off. Too many people had properties that they couldn’t afford and couldn’t sell their house.  Now here is some disturbing news from Curbed:

Financial Times reports that subprime mortgage bond issuance doubled in the first quarter of 2018 compared to a year ago, going from $666 million to $1.3 billion. Furthermore, it quotes a financial analyst predicting that issuance for the year will hit $10 billion, which is more than double the $4.1 billion issued last year. For context, the value of American subprime mortgages was estimated at $1.3 trillion in March 2007.

That even makes us sweat a little. Further into that article they state that there are some new companies that have jumped into the market and have rebranded theses subprime mortgages as “noprime”.

Now on to current property values. This plays a big part of the equation. Prices have been steadily rising for at least 6 years now in most markets, to the point where a lot of properties are over valued. Check out these comparisons from American Banker:

As of December 2017, there was a more even distribution among the three groups: 33% overvalued, 35% at value and 32% undervalued.

Read The Full Article “Housing bubble or not, the real estate market is in trouble” Here

Another disturbing trend. Notice that 33% of properties are overvalued as of last December compared to 67% in November of ’06 at the start of the crash.

Lastly, check out this video from Faye Bishop:

So when will we have another crash? No one really knows. It does look like if things continue on the current track that one could definitely be in the cards. The only thing that is a saving grace right now we think is that builders have not started building houses like they were 12 – 15 years ago, keeping the supply in check.

So the point of all of this is that if you need to sell your house that is in need of major repairs or updates and you know that putting your property on the market will take some time to get a buyer, you should consider selling now. If you are wondering how to sell a property like that, check out this article “Where Can You Sell Your House Fast“, or you can visit our website for a free, no obligation offer on your property – or call us at 770 756-8680.